Cannabinoids, which in the cannabis they function as an immune system helping them to fight different predators, they are biologically active chemists and are mainly responsible for the therapeutic properties of cannabis. To date, more than 100 different cannabinoids have been identified (which when they come from a plant are called phytocannabinoids) present in this plant. However, the most studied and for which there is more evidence of its benefits are delta-9-tetrahydrocannabinol (THC) and cannabidiol (CBD), although the continuous study of the plant is producing data that suggest that other cannabinoids ( and even other components, such as terpenes) may contribute to its therapeutic effects1.

Cannabinoids are biologically active, as they interact with the endocannabinoid system. This system includes receptors to which different cannabinoids can join (similar to what endocanniboids do, which refer to cannabinoids produced by the human body, such as anandamide and 2-arachidonoylglycerol or 2-AG), and it is through activation / inhibition of these receptors that cannabinoids exert their therapeutic benefits.

Delta-9-tetrahydrocannabinol (Δ9-THC, or THC for simplicity): THC is one of the best known and most studied phytocannabinoids. Much of its fame comes from the fact that the psychotropic effects associated with cannabis are derived from its action (it is for this reason the most sought-after cannabinoid for recreational use). However, it is currently receiving much attention from the scientific community since many of the benefits associated with cannabis are the result of the action of THC in the endocannabinoid system. There are several benefits associated with THC, but those for which there is more clinical evidence are: the reduction of nausea and vomiting in adults (especially in cancer patients undergoing chemotherapy), the reduction of pain symptoms in patients who suffer from chronic pain2 (the use of cannabis in the management of pain symptoms has led many patients to start replacing their conventional pain medications - opiates, with cannabinoid based medications, which in many cases are more efficient with fewer side effects of lesser gravity3), reduction of muscle spasms in patients with multiple sclerosis4, improved sleep in patients suffering from sleep disorders (mainly disorders associated with obstructive sleep apnea syndrome, fibromyalgia, chronic pain and multiple sclerosis)2, appetite stimulation in patients undergoing cancer treatments or with HIV2.

Cannabidiol (CBD): CBD, currently, will be the cannabinoid that has received the most attention by the scientific community. Not only does it not induce any psychotropic effect (unlike THC), it also appears to reduce some of the unwanted effects associated with consuming higher doses of THC.5 In addition, it was the World Health Organization (WHO) that stated that “in humans, CBD does not demonstrate any indicative effects of abuse or any potential for addiction (…) To date, there is no evidence of public health problems associated with use of pure CBD ”, meaning that CBD is well tolerated and has a good safety profile when consumed.6 As for its therapeutic benefits, CBD will be the cannabinoid that has been shown to have broader therapeutic applications. CBD has already been shown to have neuroprotective properties7, which result from the anti-inflammatory properties8 and antioxidants9, antidepressant properties10, antipsychotic11analgesics12, anti-tumor13anxiolytics14, anticonvulsant effects15, among others already assigned. However, looking at the scientific evidence, we find that where the CBD has truly proven its effectiveness was in the treatment of some of the most cruel syndromes of childhood epilepsy (such as the Dravet and Lennox-Gastaut syndromes), where it reduced on a large scale the number of seizures that children with these pathologies suffered daily, allowing a substantial improvement in their quality of life.16 The other properties already identified, although they have been scientifically proven, need further studies in more patients for the effectiveness of CBD to be properly established. Even so, this cannabinoid has immense therapeutic potential, which means that it is being used in the most varied areas. In addition to being part of medicines, we found CBD in dermocosmetic products. Here, its use as therapy has had very promising results, due to its anti-inflammatory, antioxidant properties17 and its ability to soften the skin18. We see CBD also being used in food supplements and even in veterinary products, with several reports of success.

In addition to CBD and THC, there are other cannabinoids that have shown a high therapeutic potential and have attracted the attention of the scientific community, even though the study of their properties is in the beginning (at least when compared with THC and CBD). 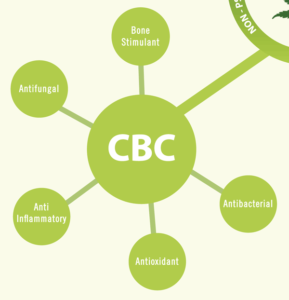 Cannabichrome (CBC): another major phytocannabinoid found in the cannabis plant that also does not induce any psychotropic effect. It has already been shown to have anti-inflammatory, antibacterial and antifungal properties.19 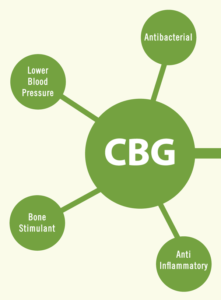 Cannabigerol (CBG): this cannabinoid, which is found in most cannabis varieties, in addition to having no psychotropic effect, has shown great therapeutic potential. It has already revealed important antibiotic effects and has the potential to reduce intraocular pressure (important in the treatment of glaucoma). In addition, it has been shown to have analgesic and anti-inflammatory properties.20 Recent studies have indicated that CBG also has adrenergic, serotonergic, enzyme-modulating and antidepressant properties. In addition, it may have positive effects in conditions such as cancer, general inflammation, some skin diseases and inflammatory bowel diseases.21 Tetrahydrocannabivarin (Δ9-THCV, or THCV for simplicity): as the name implies, THCV is very similar at the molecular level to THC (although it is only noticeable in most cannabis varieties). This phytocannabinoid, despite containing psychotropic properties, manages to contradict the undesirable side effects normally associated with THC22 (for example, THCV is an appetite suppressant which will contradict the appetite-stimulating effects of THC23). Its therapeutic potential is very large, and it has already been shown to have antioxidant properties that result in neuroprotective properties (it can be a promising therapy in relieving the symptoms of Parkinson's disease and it can also delay the neurodegeneration resulting from that disease, and it can improve the symptoms resulting from schizophrenia. )24. It also has anti-inflammatory properties25, has already been shown to promote bone growth (having enormous potential in the treatment of osteoporosis) and helps to regulate blood sugar levels (also having potential in the treatment of diabetes)23. 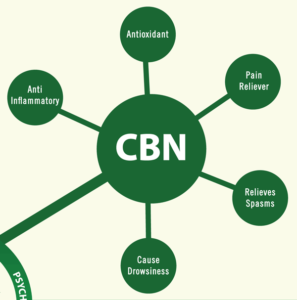 Cannabinol (CBN): it was the first cannabinoid to be identified and isolated (circa 1940)26. Being a THC metabolite, it has mild psychotropic properties, but it also has strong therapeutic potential. CBN has already demonstrated sedative, anticonvulsant, anti-inflammatory and antibiotic properties. Also for topical applications it seems to be useful, showing potential in the treatment of psoriasis and burns.27